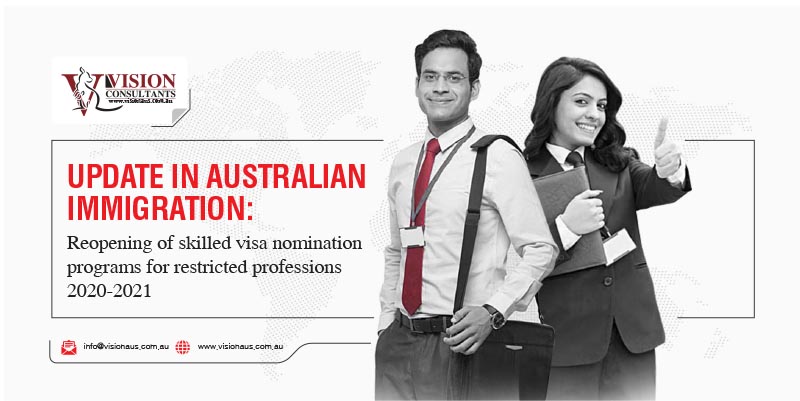 The issuing of limited interim nomination has been done by the Department of Home Affairs to the states and territories. This paved way for the beginning of the skilled visa programs before the finalized allotment that was to be delivered as the part of the Federal Budget announcement on October 6th.Victoria is the latest to join the list that announced the “compact and targeted” nomination programs.

On Wednesday, the state declared that on the 8th of September 2020, they will be opening the nomination program for Skilled Nomination Subclass 190 and Skilled Regional Sponsored Subclass 491 visa categories.

The state also suggested that they will be altering the criteria of choosing applicants for these programs. It will be much more efficient in dealing with the challenges resulting due to the coronavirus pandemic.

“For this interim period, we will only select applicants to apply for Victorian visa nomination if their Registration of Interest demonstrates they are working in health or medical research and contributing to Victoria’s economic recovery and/or health response.”

This model of the program will be applicable till the 5th of October.

An announcement which is much similar in nature has been made by NSW. It also indicated that they will put to use their allocations which were limited in number to select occupations that would actually help in the state’s recovery like health, information and communication technology and engineering.

Apart from this, the state also mentioned that they will analyze these very modifications if they receive more applications next month, depending on when that happens.

The announcements are in accordance with the statement given to SBS Punjabi the previous month by the Department of Home Affairs’ where it mentioned that the existing effects of the pandemic worldwide- “medically, socially and economically” will have a major effect on the future of Australia’s Migration Program.

“The government is closely monitoring migration and visa settings to ensure they are consistent with public health measures, are flexible and do not displace job opportunities for Australians so that Australia can deal with the immediate and post-recovery impacts of  Covid-19,” said a spokesperson to Vision Consultants.

What does this mean for applicants?

Migration Agent said that this means all the present and past applications will now be looked at according to the priorities put forward by the Department of Home Affairs.

“Applications with critical skills such as those in health-related occupations, IT and engineering, etc will be given priority over other applicants. Those who have already applied and are not in critical occupations will most likely have to wait I the queue until after the priority applications for critical roles have been processed,” he says.

Adding to his previous statement, the migration agent continued that even though most states will continue to open programs in accordance with the Priority Migration Skilled List announced on Wednesday, Victoria is one such state that would not do that. Victoria rather announced that it will be reopening for the people who are working in the fields of medical and health research.

“While most states will open programs for occupations listed in PMSOL, other than Victoria which has stated that only health-related professionals will be given a priority leaving out many other fields such as engineering which can be a disappointed for a few,” he adds.

In accordance with the advice of the Home Affairs, ACT has declared that it will schedule the meeting on or before the 14th of September.

Below are the main points of the interim changes made to the program:

Mr. Singh says that many states like Tasmania and ACT have declared that priority will be given to the applicants who are inland but these are just temporary placements.

“Almost every state has said they will first invite those who are currently in the state, but it is expected that doors will be opened to offshore applicants once the budget is handed down in October,” he says.

Immigration South Australia has also received a limited number of allocations for its skilled business programs in order to aid the economic and public health recovery of the state during the ongoing health crisis.

The state has defined on its website that the Home Affairs has recognized critical sectors to fully support the public health response of the country and its recovery during the novel coronavirus pandemic.  Priority will be given to applicants who are nominating these occupations in the sectors that need the most assistance.

“The list of priority critical sectors may change over time.”

Like other states, Tasmania has also received temporary application for its skilled nomination and business visa programs. After the budget is given next month, these placements will be updated.

The purpose of General Skilled Migration Program is to promote the migration of the skilled labor to Australia so that they could help in strengthening the workforce of the state. Apart from this their role is also to match up with the much altered needs of the industry.

Annually, all leaderships receive a certain and a specific amount of percentage from the government. Based on this, the states and territories choose skilled and business migrants for Skilled Nominated Subclass 190 and the Skilled Regional Sponsored Subclass 491 visa categories.

A migration consultancy CEO says that the pandemic has pressurized states into altering these programs by making interim changes to them and from the looks of it “small and targeted” take on the matter will pave the way in this financial year.

“It seems what the federal government is doing is that they are being very restrictive and prohibitive about who is going to be able to apply for visas in response to COVID-19.

“While this approach will also provide the Department with an opportunity to reduce or clear its backlog of unprocessed applications, it appears to indicate that the quotas of the 2020/2021 program are set to be cut insignificantly,” he says.

If you are looking to switch university Melbourne. You have come to the right place. Vision Consultants education consultant Melbourne team can assist you. Get in touch with our AAT lawyer today.

previous
Australian university's rather "Brutal and Distressful" fee increase discussed in the Parliament
next
Migrants in Tasmania are working on their skills to diversify the state’s building and construction industry
Call Now
info@visionaus.com.au
visionaus.com.au
Melbourne No#: (03) 9939 0545
Sydney No#: (02) 8021 7154
Hobart No#: (04) 15385 560