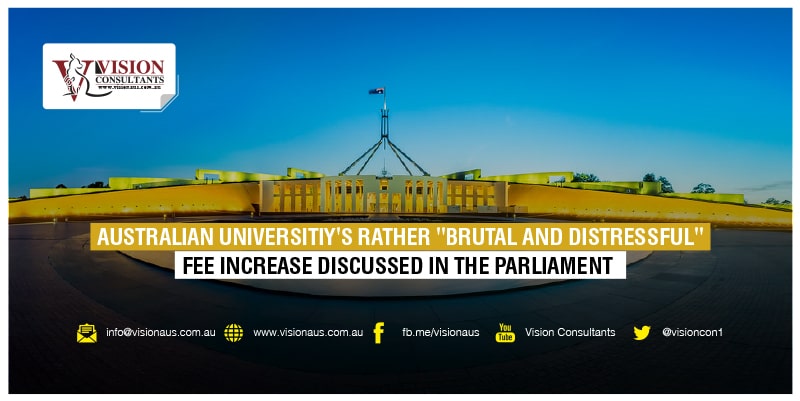 The government came up with a rather disputable plan on how it will change the method of investing funds for university classes and courses. It has been discussed in the Parliament earlier this week. First passed in the House of Representatives, it has now reached the Senate for further discussion.
Dan Tehan, the Federal Education Minister told SBS Urdu that the package of the “Job Ready Graduates” will result in an increase in the number of university places for local students by 39,000 in the year 2023 and by 100,000 in the time span of 10 years.

“The package will encourage students to study units like Mathematics, English and IT, to improve their chances of getting a job in areas of expected job demand.

“That means more Australian students will get a university degree.”

The package renders to the following:

The Government says that the Tertiary Education Quality and Standards Agency Amendment Bill 2019 will not only help the job-ready graduates but will also revamp the fee structure for Higher Education students.

The proposal that the government has put forward has not really satisfied the Greens and has instead been termed as ‘Brutal and Distressful’. Mehreen Faruqi, the Senator of Greens said that the government representatives that acquired free education from university are now planning of changing the fee structure for the students who are currently studying.

In an interview she said, “For them to now condemn the students to decades of debt is nothing less than hypocrisy.”

She then continued saying, “Everyone in Australia should have the right to Higher Education.”

“It is a right; it is not a privilege. It is not a commodity to be sold to the highest bidder.”

Two months ago when Mr. Tehan announced the package, he said that the package aims to “incentivize” students to make more job-relevant choices, that lead to more job-ready graduates, by reducing the student contribution in areas of expected employment growth and demand.”

The President of National Union of Students, Molly Willmott declared the packages as a “budget neutral plan” which explains how no amount of money is being invested in the universities.

“There is no part of this bill that doesn’t hurt the students; this bill should be voted down.”

“In the next few years, we are about to see a fee hike, where the arts, humanities and law students will be paying more fees and will be put on a lifetime of debt. Also, coupled with funding cuts that will hurt the ability of the universities to teach the classes properly or provide quality education.

Apart from this, there are other terms of the packages that are alarming.

Under this bill, failing in their first year subjects could result in the students’ losing their loans of higher Education.

On this Molly said, “It hurts the students with disabilities, migrants or indigenous groups, the students who have difficulty in accessing the finance.”

“There are many parts of this package that are “detrimental” to the students and will hit the next generation of students.”

“This bill will have a devastating and destructive impact on higher education for generations to come.”

“We know that the women will bear the brunt of this debt because about two-thirds of the students who do the humanities and social sciences courses are women.”

According to Mehreen Faruqi, the packages will decrease learning and teaching funding for universities by an approximate total of $900 million.

“That is going to reduce the quality of teaching for the students. This bill also punishes struggling students by kicking them off government support. At the end of the day, this bill is not going to do what the government says it is going to do, which is to have more students enrolled in the courses that they favor.”

The student body of Australia said that this package will alter the way how the students were planning for the degree.

The NUS president declared the bill as “redeemable” on the possibility of reaching the parliament inquiry.

Molly Willmott says that the Australian Government should provide appropriate funding to the universities considering how they are amidst a pandemic.

“Given that education is one of our biggest exports of the country, we need to be putting more money into education. Therefore, we must stop the leaking of staff, leaking of courses and letting money going down the drain.”

The education Minister is, however, encouraging students to carefully alter their studies keeping in mind that they learn skills that the job market requires.

“That means breaking down the traditional degree ‘silos’ by choosing units of study across disciplines and introducing a price signal to students by making degrees cheaper in areas of expected job growth.”

Our expert Education and Migration Agents are happy to assist you! Vision Consultants Australia – your trusted source for Education & Migration visa consultancy services.