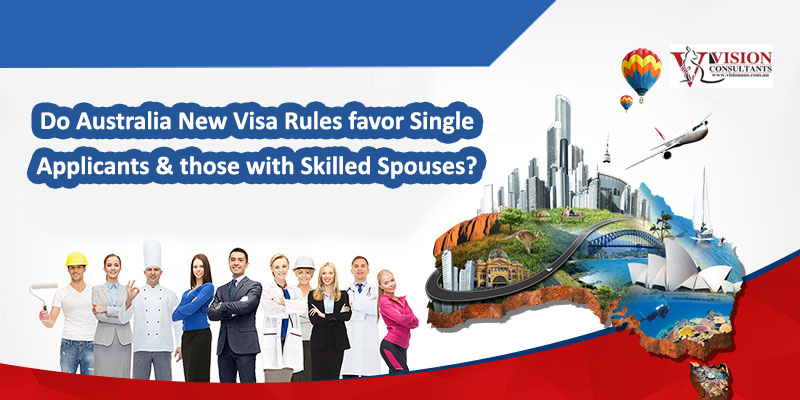 The Australian immigration laws have charted out new visa rules with more favorable conditions for potential migrants who are either single applicants or have highly skilled spouses. According to the rules put forward, an applicant’s application can be impacted if their partner is not skilled or highly educated. The new laws are set to come into force by November 2019.

According to the Migration Amendment (New Skilled Regional Visas) Regulations 2019, three kinds of new visas, which also include the regional ones, have been introduced in a bid for the Australian government to increase the settlement of migrants to regional areas of Australia to develop them economically and financially.

Here we would like to quote the statement issued by the Minister for Immigration, Citizenship and Multicultural Affairs, “The amendments introduce a revised points system for the subclass 491 visa as well as existing General Skilled Migration visas. Points are awarded for attributes that are linked with the applicant’s ability to make the greatest economic contribution, as the key purpose of the skilled migration program is to maximize the economic benefits of migration to Australia.”

The proposed changes that are expected to become in to force in Australia new visa rules may include following pointers:

It can be evidently witnessed from these point scoring amendments and grids that more preference will be given to those candidates who are either single or have a skilled professional spouse or de facto partner. The applicants with a spouse who have not sufficient skills or English language expertise may have to look for other ways to increase their points.

In order to further gain assistance regarding this new visa type and if you want free one-on-one consultations,
Vision Consultants: Migration Agent & Education Consultants in Australia can provide expert education and migration consultancy and visa services. Unparalleled service standards have given us an industry feat of best education agent and migration agent in Australia. Our team of MARA registered agents is always there to guide you.