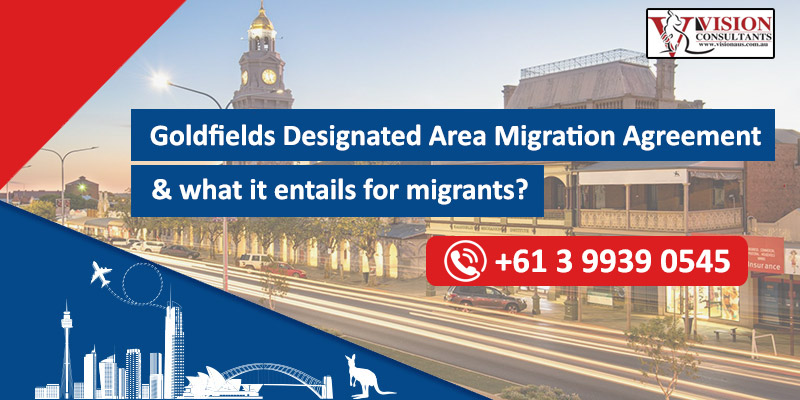 With effect from 1st July 2019, around 500 immigrants in 72 in-demand occupations will be able to come to Australia per year through sponsorship by Australian employers with pathway to residency. This scheme will be under the Designated Area Migration Agreement for the city of Kalgoorlie Boulder which is located in Western Australia. It is an active bid by the current administration, the Department of Home Affairs and the regional states themselves to populate the less established Australian states and shift them economically and socially and also to release burden from the main suburbs and cities like Melbourne and Sydney.

The chief executive of City of Kalgoorlie-Boulder which is located in Western Australia is of the view point that the federal government skilled migrant program can fill the job advertised on a rather quick basis. The economy of the state is already constraining from the supply gap of professionals.

He further added that the city will begin accepting applications for the Designated Area Migration Agreement from next week. It should also be noted that a five year multi-tier agreement was signed between the Morrison led administration and the city and also their website has already allowed various businesses to opt in the scheme now.

In addition to this, this program will let 500 migrants to come through Australia and based in Kalgoorlie-Boulder, Menzies, Leonora and Coolgardie and these cities will also sponsor each year migrants who will be working varied industries including mining, manufacturing, engineering, food, hospitality, childcare, healthcare, education and so on.

Also it should be noted here that across these industries, eligible businesses will have access to 72 occupations, many of which are not available through the standard stream of the Temporary Skill Shortage (subclass 482) or the Employer Nomination Scheme (subclass 186) visas.

Mr-Walker has pointed out that the Migration agreement would also eliminate high recruitment costs and stimulate the local economy by supporting migrants willing to settle in Kalgoorlie-Boulder instead of using fly-in, fly-out workers to fill labor shortages.

He further added, “We are confident because the Chamber of Minerals and Energy, the Kalgoorlie-Boulder Chamber of Industry and Commerce and Regional Development Australia Goldfields-Esperance have been talking to their employers, so we know they will want to have a go”

But a part from all these assurances and irrespective of the fact that there are being no limits imposed on how many positions employers can nominate for, the administration is working hard to monitor minutely each and every application on a strict scrutinizing basis so that all forms of transparency should be ensured.